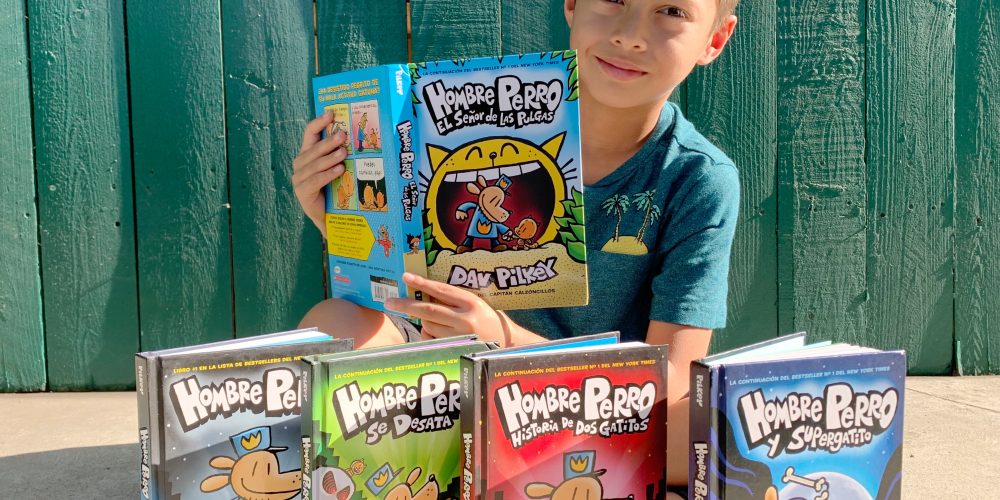 Disclosure: This giveaway is in partnership with Scholastic. All opinions are my own. 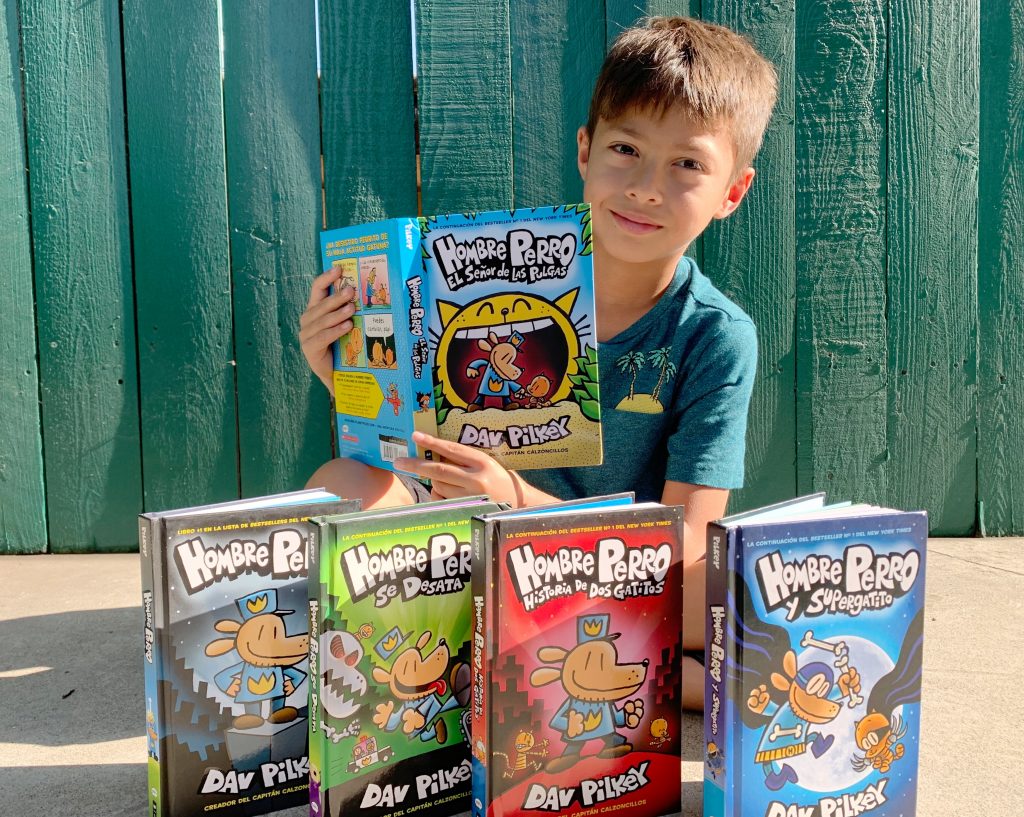 My oldest is a big fan of author Dav Pilkey – so I couldn’t be more excited to share this Hombre Perro series giveaway. Be sure to scroll down to enter!  Hombre Perro books are the Spanish editions of Dav Pilkey’s best selling Dog Man series – recommended for ages 7 and up. This was the first book series in Spanish that Caiden got into…it’s fun, entertaining, and perfect for young bilingual learners.

Since Caiden goes to a Spanish Immersion school, we have an agreement: Captain Underpants in English and Dog Man is Spanish…so you can imagine his  excitement about the latest book! Spoiler alert: he loved Hombre Perro: El Señor de las Pulgas – because it was full of action.

About The Dog Man Series

Dog Man follows the adventures of a lovable canine superhero who’s part dog and part policeman. With each Dog Man book, readers see the growth and development of the main characters George and Harold through their comics. Their artwork, grammar, as well as their spelling improve as the series progresses. 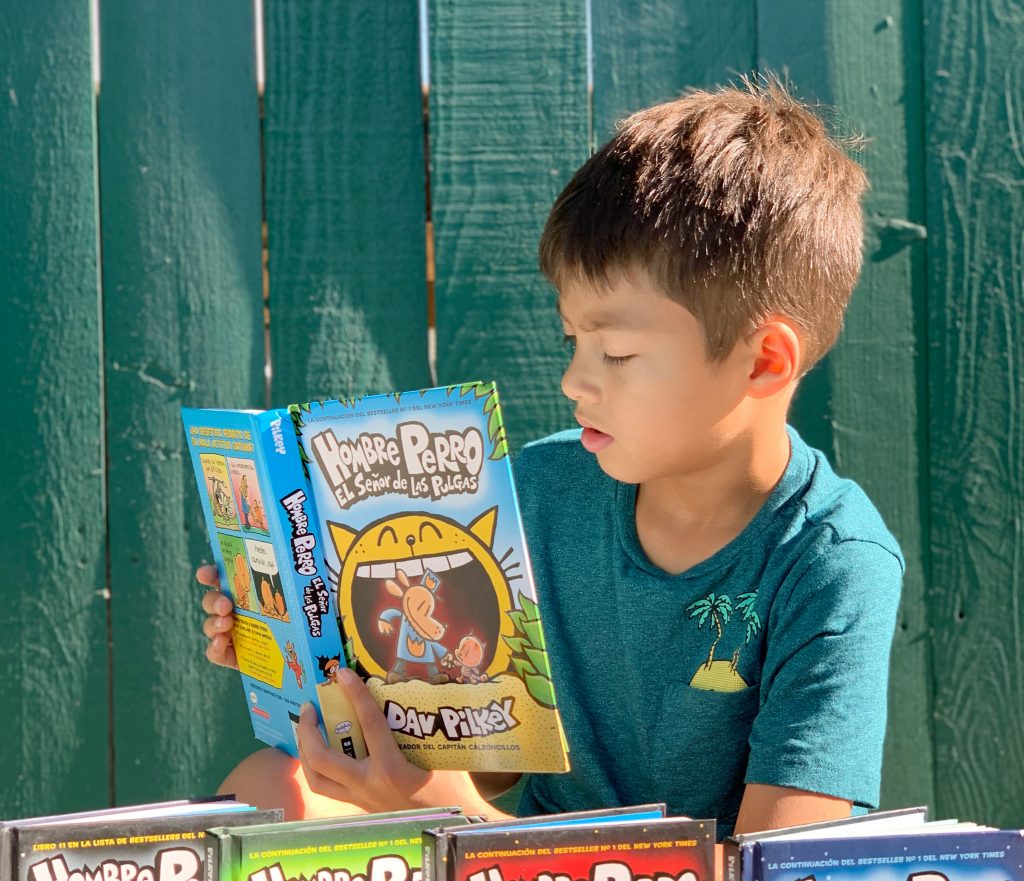 When a new bunch of baddies bust up the town, Dog Man is called into action — and this time he isn’t alone. With a cute kitten and a remarkable robot by his side, our heroes must save the day by joining forces with an unlikely ally: Petey, the World’s Most Evil Cat. But can the villainous Petey avoid vengeance and venture into virtue?

Dav Pilkey is the author and illustrator of the worldwide bestselling series CAPTAIN UNDERPANTS and DOG MAN. He is also the creator of the Caldecott Honor picture book THE PAPERBOY, the California Young Reader Medal-winning DOG BREATH, and the RICKY RICOTTA’S MIGHTY ROBOT series, illustrated by Dan Santat.

Pilkey’s latest creation, Dog Man, continues to be a #1 New York Times bestselling series with more than 23 million copies in print worldwide and translations available in more than 27 languages. Dog Man is being adapted as a stage musical in “Dog Man: The Musical” from TheatreWorksUSA in New York City in Summer 2019, with a North American tour to follow in Fall 2019 and beyond.

This fall, Dav Pilkey’s “Do Good Tour” will bring together kids, families, and educators, to highlight the many ways books inspire—and how each individual can help others make a positive difference wherever they are. Hosted by bookstores and key community partners, all of the events will have a “do good” component to support non-profit literacy organizations, local charities, military families, schools as well as libraries in underserved areas. The “Do Good Tour” officially kicked-off at the Mississippi Book Festival in Jackson, Mississippi on August 17th. 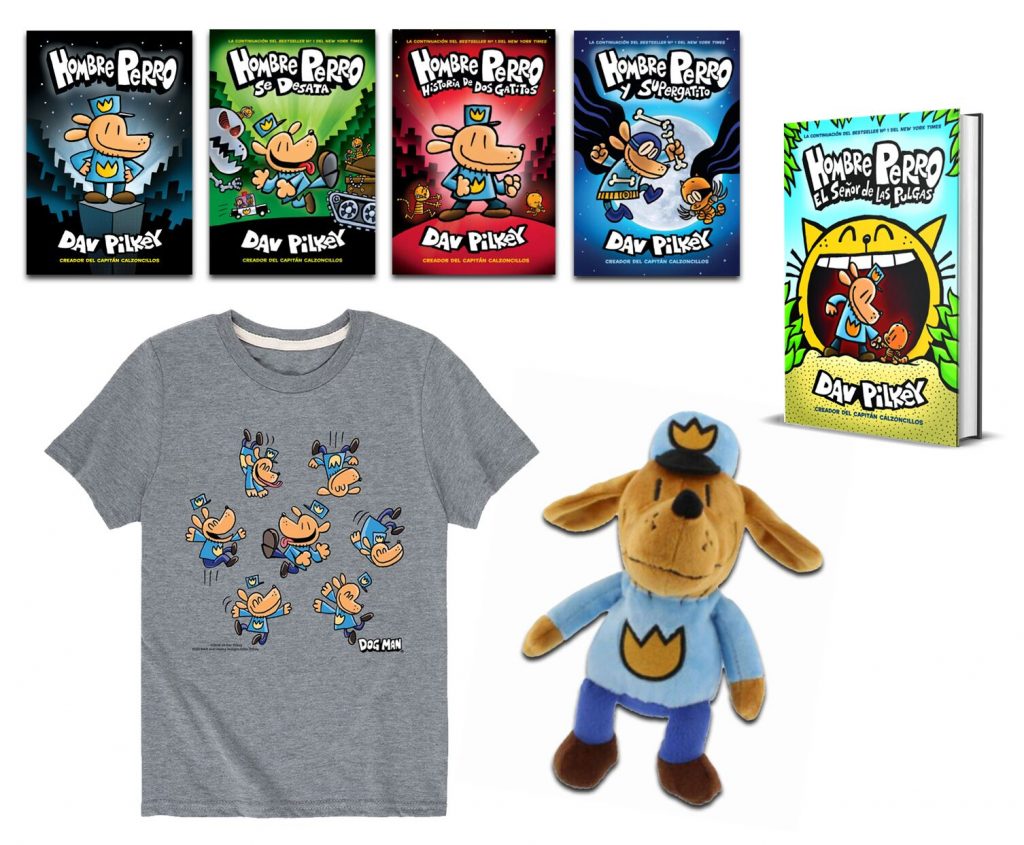 Enter for your chance to win all five books in the Hombre Perro series, plus a Dog Man plush and t-shirt. Open to US residents only. 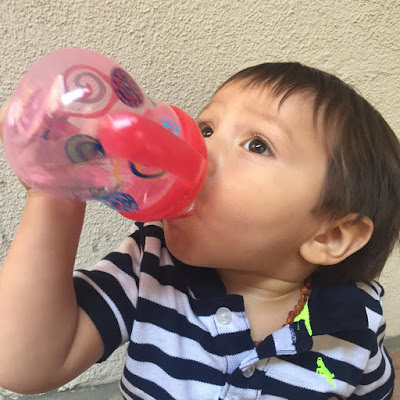 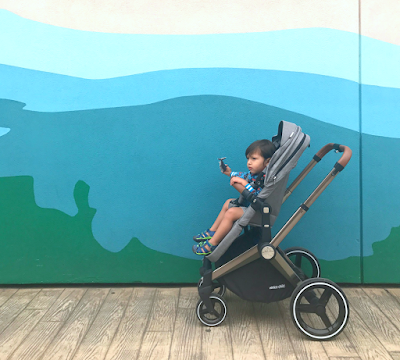 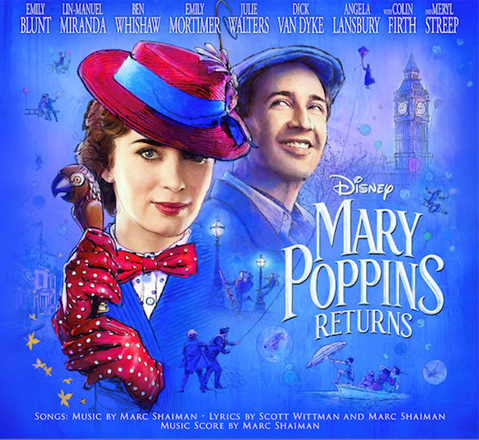