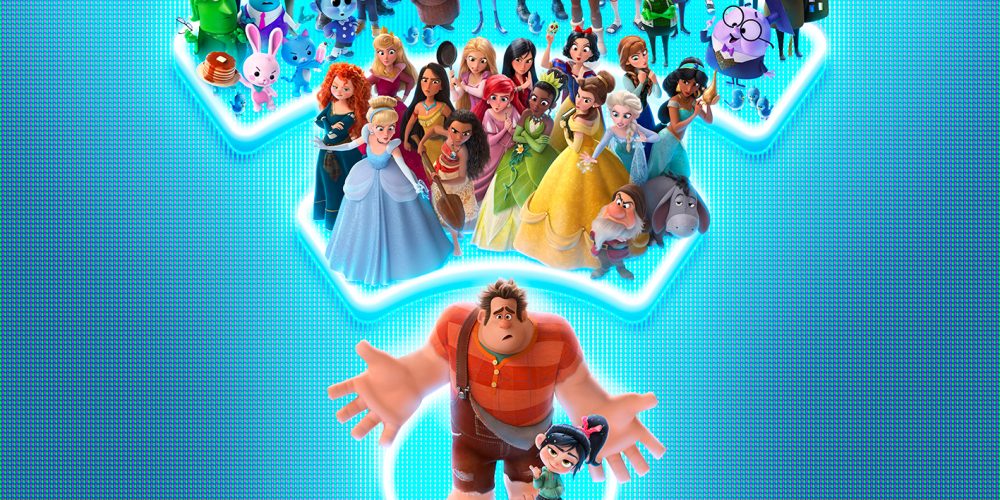 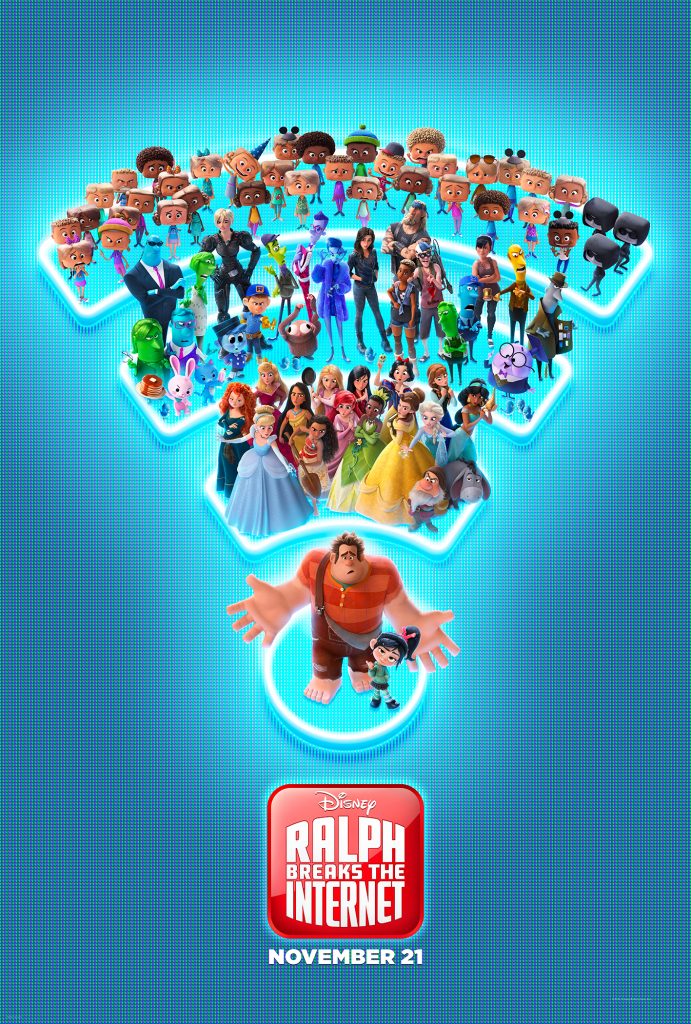 Today is the day, Disney’s Ralph Breaks The Internet has uploaded into theaters! This is a movie that I’ve been looking forward to. We are consumed by the Internet on a daily basis and I can’t wait to see how Ralph “Breaks” it!

I sent my boys (Danny and Caiden) for a father-son movie date to watch an early screening of the film, so be sure to scroll below for their spoiler-free thoughts and then print-out FREE activity sheets for yourkids!

This animated film is the follow-up to 2012’s “Wreck-It Ralph” and can you believe, its the first feature-length theatrical sequel from Walt Disney Animation Studios since 2000’s “Fantasia 2000,” which was a sequel to 1940’s “Fantasia.” The only other sequel is 1990’s “The Rescuers Down Under.” WOW.

In RALPH BREAKS THE INTERNET, video-game bad guy Ralph (voice of John C. Reilly) and best friend Vanellope von Schweetz (voice of Sarah Silverman) leave the comforts of Litwak’s arcade in an attempt to save her game, Sugar Rush. Their quest takes them to the vast, uncharted world of the internet where they rely on the citizens of the internet—the Netizens—to help navigate their way. Lending a virtual hand are Yesss (voice of Taraji P. Henson), the head algorithm and the heart and soul of the trend-making site “BuzzzTube,” and Shank (voice of Gal Gadot), a tough-as-nails driver from a gritty online auto-racing game called Slaughter Race, a place Vanellope wholeheartedly embraces—so much so that Ralph worries he may lose the only friend he’s ever had.

I am always hesitant about sequels, especially if I already love everything about the original. With Ralph Breaks The Internet, I will admit: I have very high expectations. The trailer alone looks amazing and yes, I’m looking forward to watching that Princess scene. I mean, all my favorites in ONE ROOM. Eek. 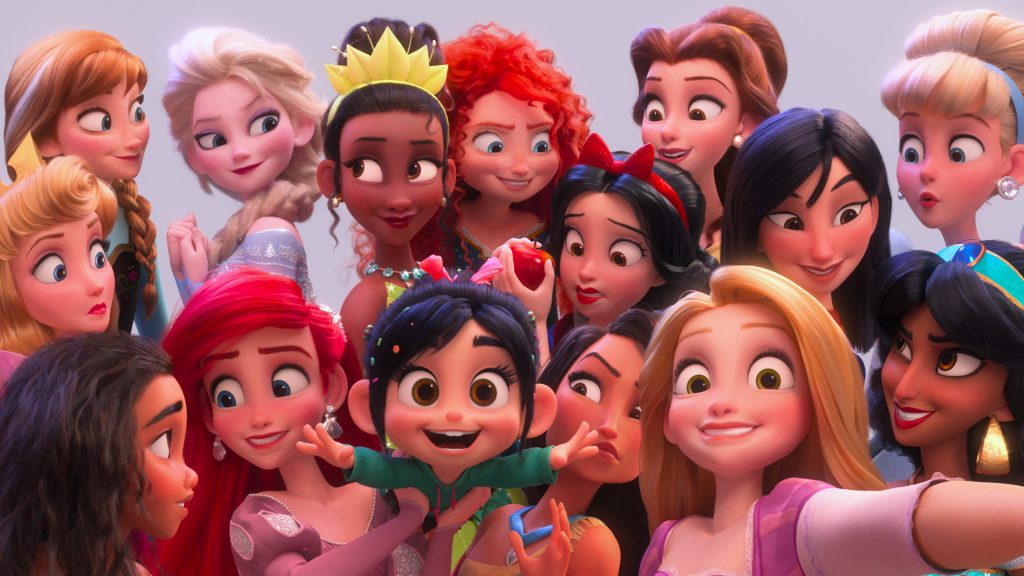 Danny and Caiden watched an early screening of the film and of course has kept it spoiler-free for me…and you. They are the GAMERS in this household, so I wanted to know their thoughts – not that being a GAMER matters. But hey, the film is about two video-game characters after-all. LOL

After screening the film, Danny immediately called me and said, “You are going to freaking LOVE this movie!” And I believe him.

It was very funny and it was about FRIENDSHIP between Venellope and Ralph. I saw a lot of internet stuff (a.k.a. icons like Google) and it was very cool to see video game characters like Sonic the Hedgehog. I wanna see it again with the whole family. -Caiden (8)

Danny’s review was a little elaborate:

“Ralph Breaks The Internet was an amazing movie filled with Easter eggs and laughs for both kids and adults alike. Most of the jokes catered to the adults focused on our daily navigation through the net and our addiction to our phones. It was also hilarious seeing how Disney made those annoying “Pop-UP ADs” come to life. There was still a great amount of laughs for the young ones of course, which is why the movie was so enjoyable for the both of us. The core story really focuses on being true to yourself and really understanding what it means to be a good friend – to others, but more importantly, to yourself.”

Enjoy these Free Activity Sheets from Disney! Just click on the links below images and PRINT. 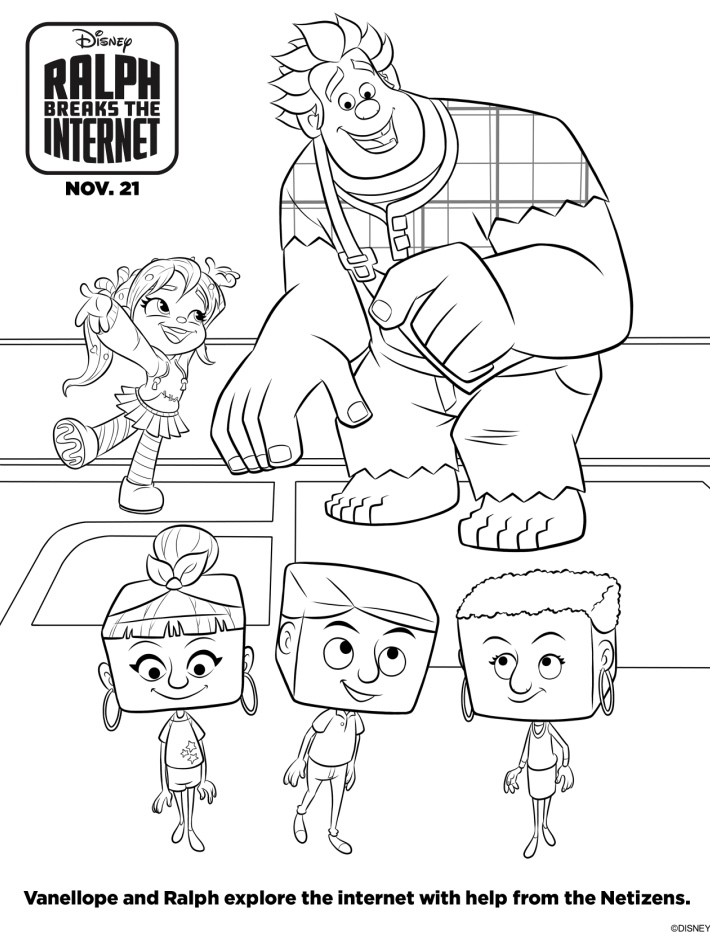 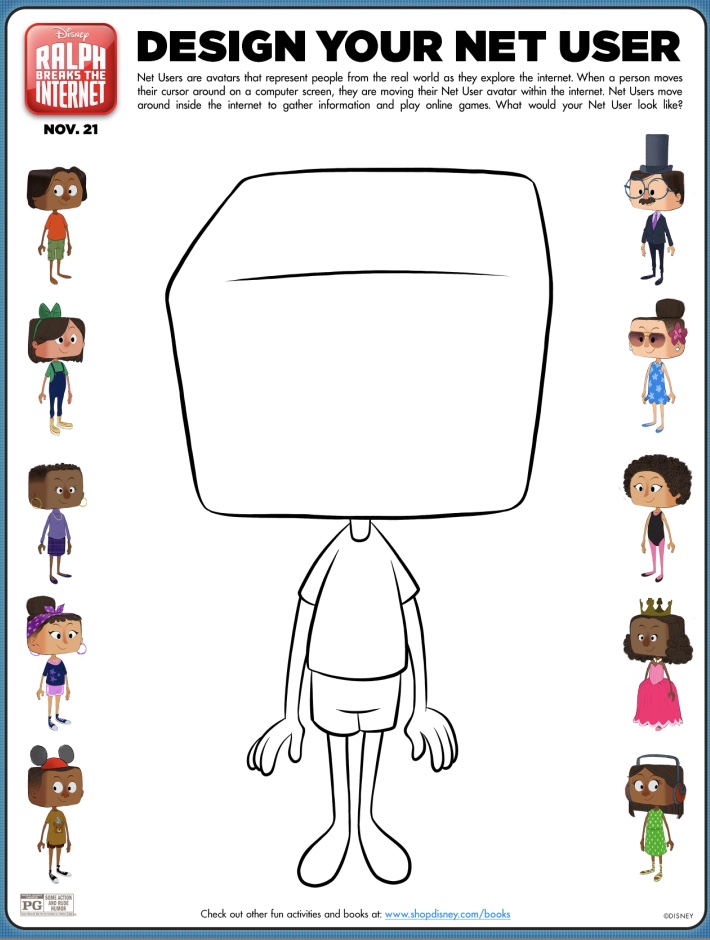 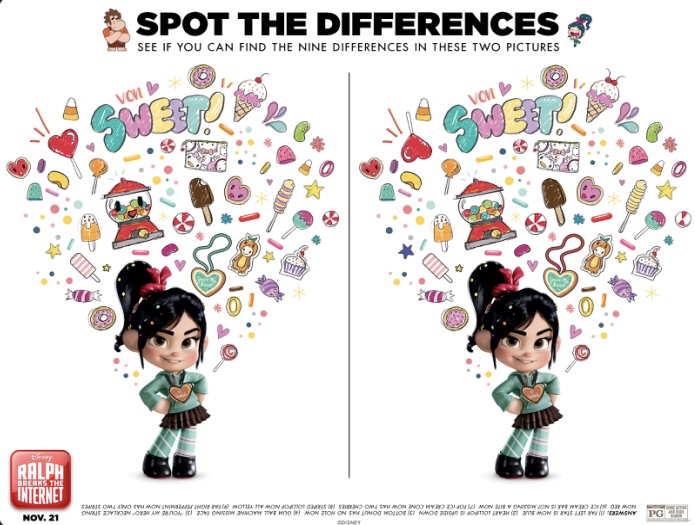 Have a wonderful Thanksgiving!