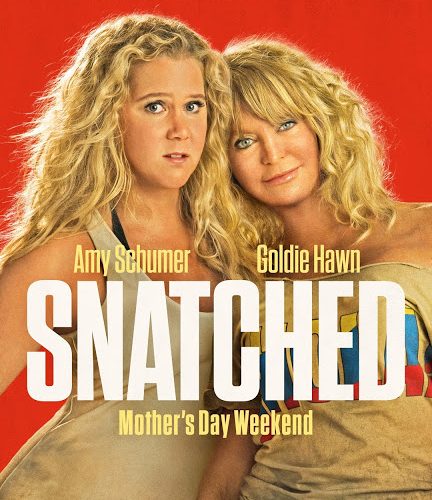 Get ready for the Mother of all Comedies! Snatch your tickets now, and BYOM (Bring Your Own Mom) to see Amy Schumer and Goldie Hawn in theaters this Mother’s Day weekend.


After her boyfriend dumps her on the eve of their exotic vacation, impetuous dreamer Emily Middleton (Amy Schumer) persuades her ultra-cautious mother, Linda (Goldie Hawn) to travel with her to paradise. Polar opposites, Emily and Linda realize that working through their differences as mother and daughter – in unpredictable, hilarious fashion – is the only way to escape the wildly outrageous jungle adventure they have fallen into.

I got to preview SNATCHED and it was hilarious. The action filled comedy with heart-felt MOMents is a must-see with your mom and/or your mom friends! It’s also Goldie Hawn’s first feature film after a fifteen year hiatus and the chemistry between her and Schumer was so organic – their on screen mother-daughter relationship was relatable.

During the Press Junket, I learned how Schumer and Hawn met and how this project had to happen.

Amy Schumer: I read the script and just pictured it with the two of us the whole time.  And then I saw her on a plane, and in the airport, I went up after the flight and I just said, I love you, like everyone else, and I’m a comic actress, and there’s this movie, and I really want you to play my mom.  And so, I wanted to just kind of plant the seed.  I wasn’t like can I have your email, but I hoped she remembered and whatever.  And then we really met in London and got in cahoots together to try to make this movie with the two of us. Goldie Hawn shared a beautiful story about Motherhood that helped influence her character in the film. It brought tears in our eyes.

Goldie Hawn: As
they [your children] get older, they’re going to have to fall in their own potholes.  And that’s when you have to learn to let go.
So, I know that as
my piece of wisdom, but this character did not know that. This character was completely unconscious about
it, and by the way, extremely needy for herself because what happens is is when
you have any empty nest situation and you lose your daughter–there’s a very
interesting story that I’ll share with you about Daphne and Persephone.  And I don’t know if you know this, but it’s a
myth, and it really is about a mother–I think it was Persephone.  I’m not sure which one was
Daphne and
Percephone. She actually was
the mother of Daphne.  And at 14, she
left her mother, and she went down to the underground.  And she missed her so much because she
suddenly had no strength. What happened was
is the daughter was now becoming a young woman.
She was having sex.  She was down
with Hades.  And she made a promise, she
missed so much, that she would create spring and summer if he’d just give her
back for those months of the year. And it’s a very
powerful image because when your daughter leaves, not always your son, but when
your daughter leaves, it feels different, and you feel weak, and you are
aging.  And it says a lot of things about
you losing your youth and your vitality because you have to pass the baton to
your daughter. And that’s a very
sometimes unconscious reason why do I feel depressed, why do I not feel happy,
why do I not feel sexual, why am I sad, why do I cry for no reason.  These are the kind of things that women need
to know. So, in this
particular movie, I think that this mother is someone who felt those things,
and I think she misses her daughter.
But, her life isn’t full the way women’s lives are full.  She gave that up.  Her husband left her for a younger woman.
So, when you look
at that, that’s where I brought my creation of this character from.  She came from somebody who basically stayed
much, much more closed in order not to feel the pain, not to feel rejection,
not to feel–and with that comes fear. So, mother/daughter
relationships have huge implications of who are you, how have you lost your
power, how do you regain your power.  You
don’t regain it by telling your kids what to do, and you don’t regain it by
putting sun guard on them.  You regain it
becoming a friend and a person that you can talk to and share with and be
intimate with and sometimes tell things you don’t want to tell anybody else.  So, that’s trust.
So, I think it’s
our job to allow our children to breathe, and then they come back.

Snatched also stars Joan Cusack, Wanda Sykes, Christopher Meloni and Ike Barinholz, who plays Schumer’s – still living at home with mom, brother.
Barinholz has an unfortable and catchy way of saying “Mama” in the film that had my crying with laughter.

Ike Barinholtz:  I have a bonus in my contract that says if
journalists like that line, I get paid.
That line actually comes from my daughter, believe it or not, my four
year old daughter who, for some reason, even though she was born and raised in
California, she sounds like Madeline [children’s book character].  She’s go mama, mama, mama, mama.  And so, it just kind of became second nature
to me, and I knew I wanted to call Goldie mama.
And then the way I said it, it was me imitating my daughter.  So now, I have to cut her in on the profit
sharing, which was not the way I wanted it to go.